Java is one of the most popular and important programming language in the world. Due to its distinct features, it is the most widely used language in every corner of the world and human life. From software and web applications to robotics, Java has become the most wanted language in today’s times.

There are many features of Java which makes it so different from other programming languages. As a result, it has become a must in software and hardware industries.

Let's have a look at some of those features.

Java is not only used in software but is also widely used in designing hardware controlling software components. According to Sun, 3 billion devices run Java.

Following are some of the usage of Java :

After writing any program in Java, we need to compile and run it to see the output of the program.

When we write any program in Java language, it needs to be converted to machine language so that the computer can understand and execute it. This conversion is known as compiling and we compile a code with the help of the compiler.

Let's look at another term - platform. A platform is the hardware or software environment in which a program runs.

It is a virtual machine that runs the Java bytecodes. The JVM doesn't understand Java source code (the language in which we write Java programs), so first, the source code is compiled into bytecode which can be understood by the JVM. The JVM provides a platform-independent way of executing code, thus making Java platform independent.

Here, we will talk about running a Java code using NetBeans and Command Prompt.

You may need to install the Java Development Kit from their website. You can download it from here.

2. In the IDE, choose File > New File, as shown in the figure below. 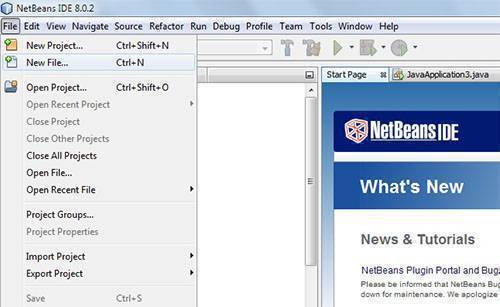 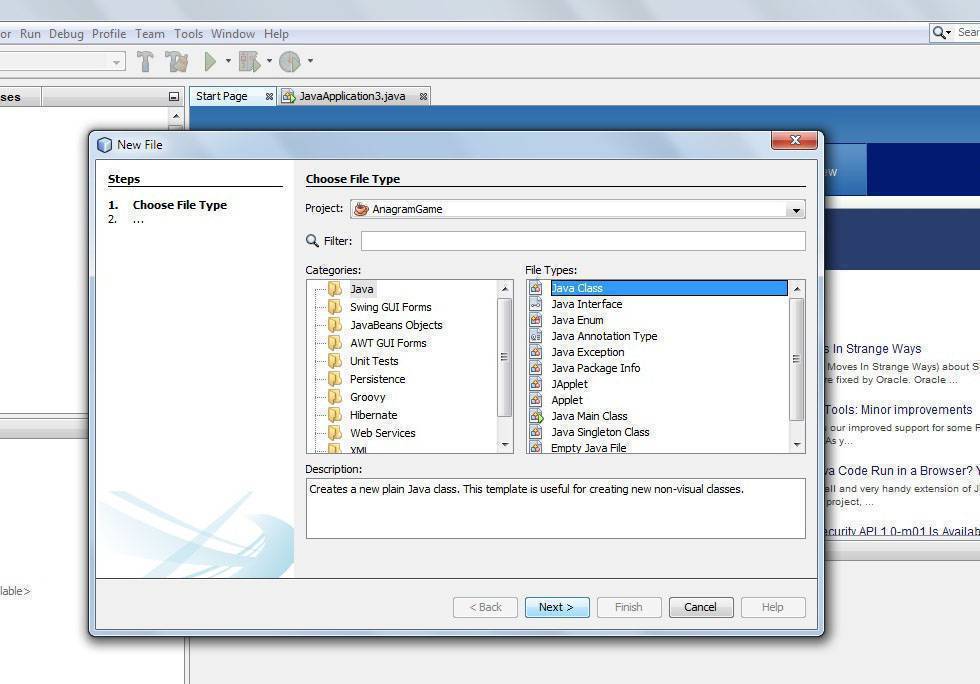 4. Give the class name Hello. 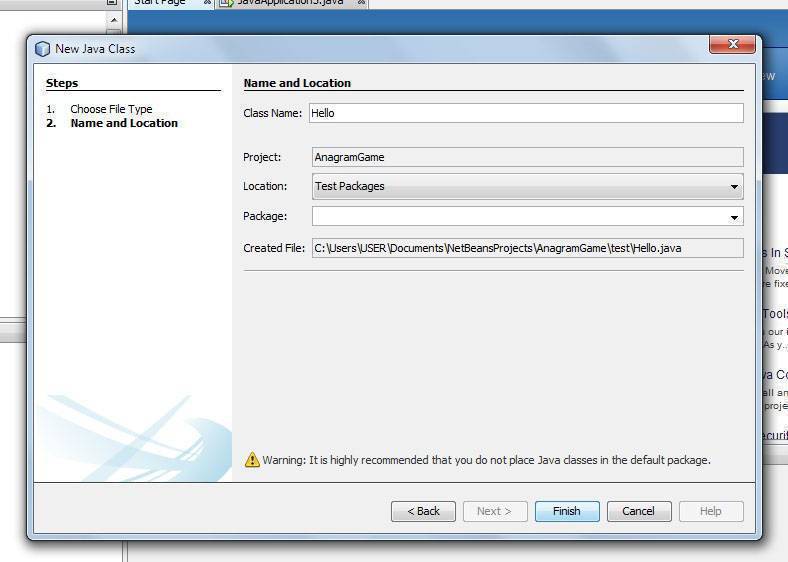 5. Type your Java code in the Source Editor window and save it (ctrl+s) 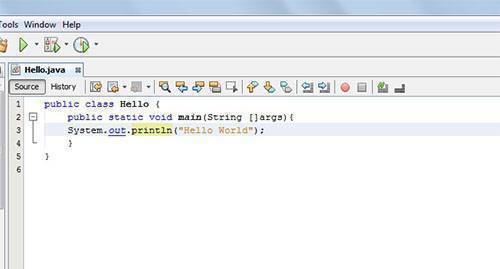 6. Now right click on the file and click Run File, the IDE automatically compiles it. You can see Hello World printed on the bottom of the screen. 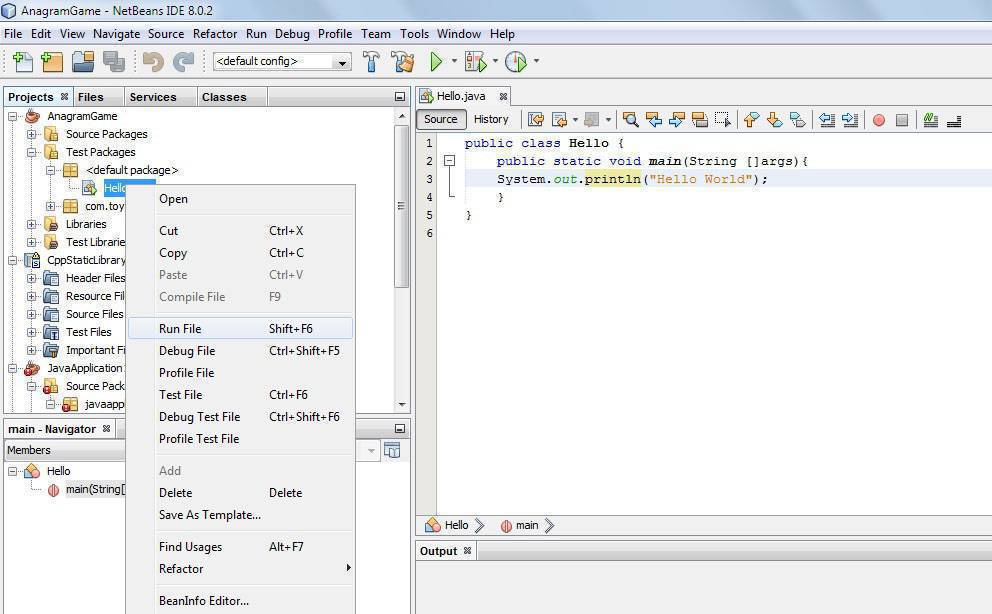 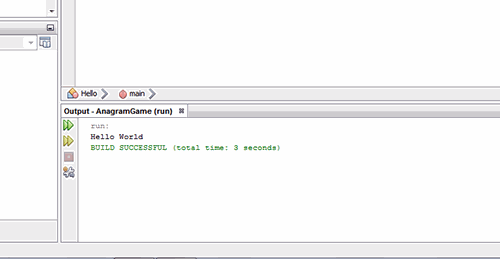 1. Write your Java program ( code given below ) in a text editor like Notepad and save it with a filename with .java extension. In our case, we named it as hello.java.

If not, you may need to install the Java Development Kit from their website. You can download it from here.

4. Let's assume that you have installed Java in C:\Program files\Java directory.

Now alter the path variable so that it also contains the path to the JDK installed directory. Change the variable value to your folder containing Java ( C:\program files\Java\jdk1.8.0_25\bin in our case ). 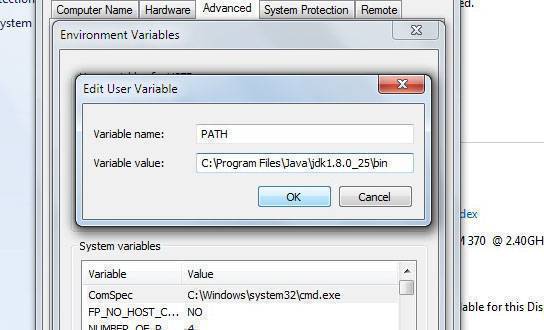 7. Use the command cd followed by the directory name to change your working directory. For example, if you are operating in C:\Users\John\Project and want to get to C:\Users\John\Project\prog ,then you need to type cd prog and press Enter. ( This directory should contain your previously created Java file ( hello.java in our case )).

8. Once you are in the correct directory in which you have your program, then you can compile and run your program.

To compile, type javac filename.java ( javac hello.java in our case ) and press Enter. Here, our filename is hello.java, so we will write 'javac hello.java'. If it is showing any error, then try to remove that error from your program and then again save and compile your program. 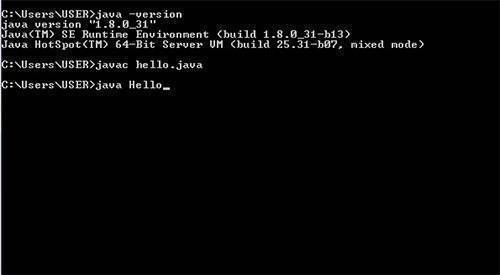 9. Once the program is compiled, run the program by typing java classname ( java Hello in our case ) and then pressing Enter. Name of the class is Hello written after class in java file.

We will get the output as follows. Now, you are ready to go for the next chapter.

If you don't have Java installed in your computer, then first install it. This is a nice tutorial to install java in Ubuntu.

2. Open a new file with .java extension in your favourite text editor ( we are using gedit ). The command is : 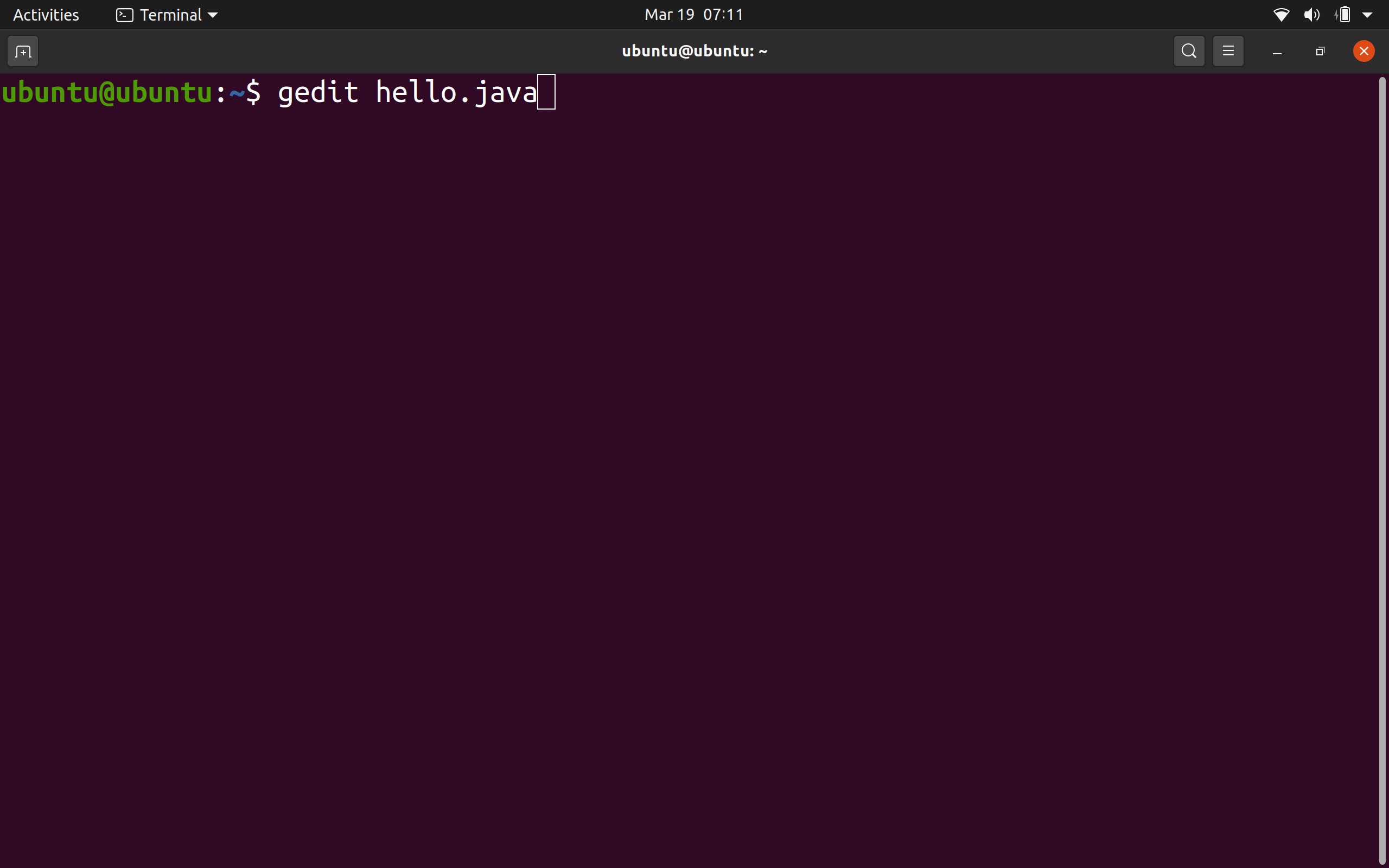 Type the Java code given below and save it.

3. Then to compile the program type javac filename.java and press Enter. We will be typing javac hello.java. 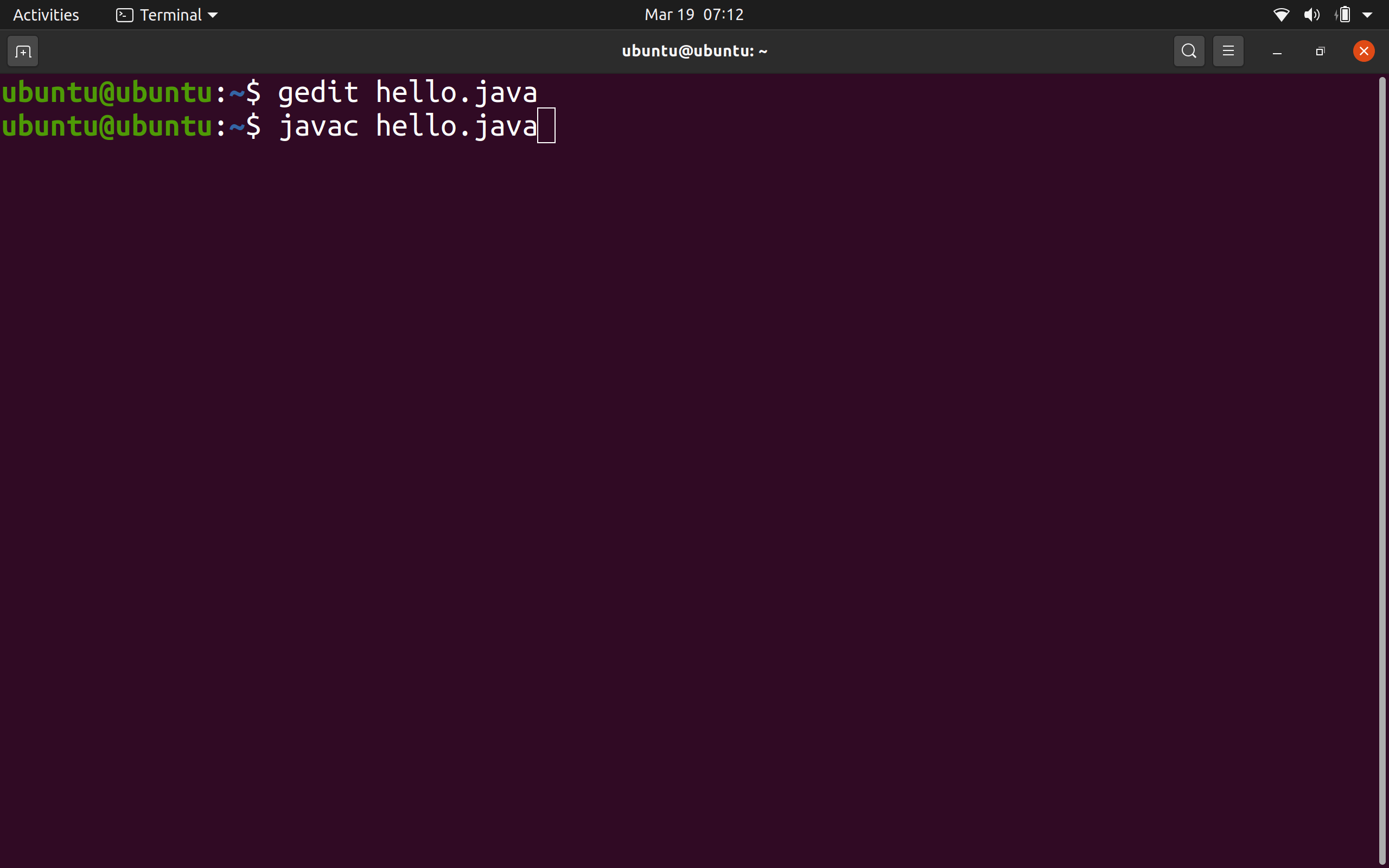 4. To run the program, type java classname ( name of the class is Hello which is written after class in the code ) in the terminal. It will type Hello World on the screen. 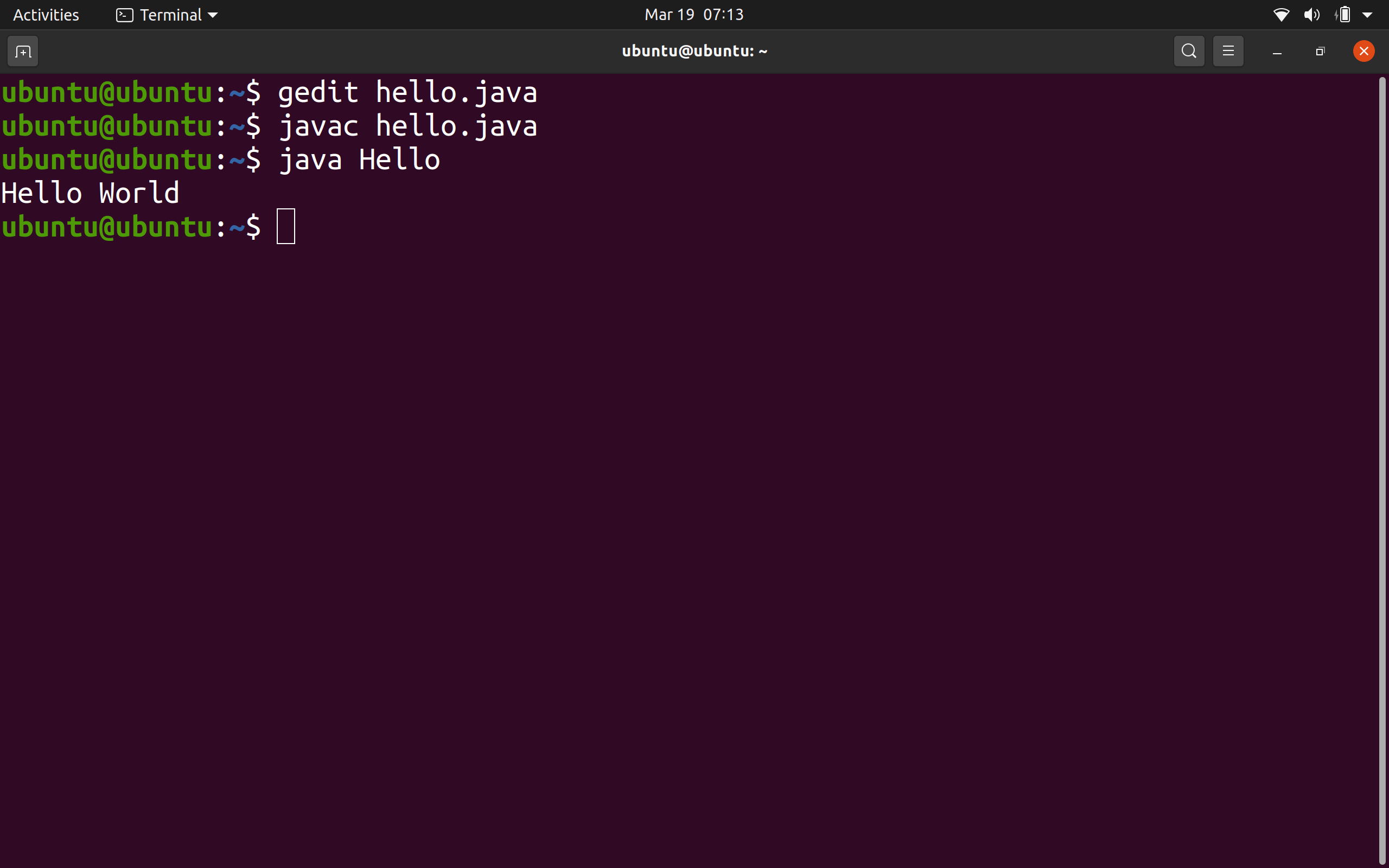 Pressing Enter will display the output as follows. 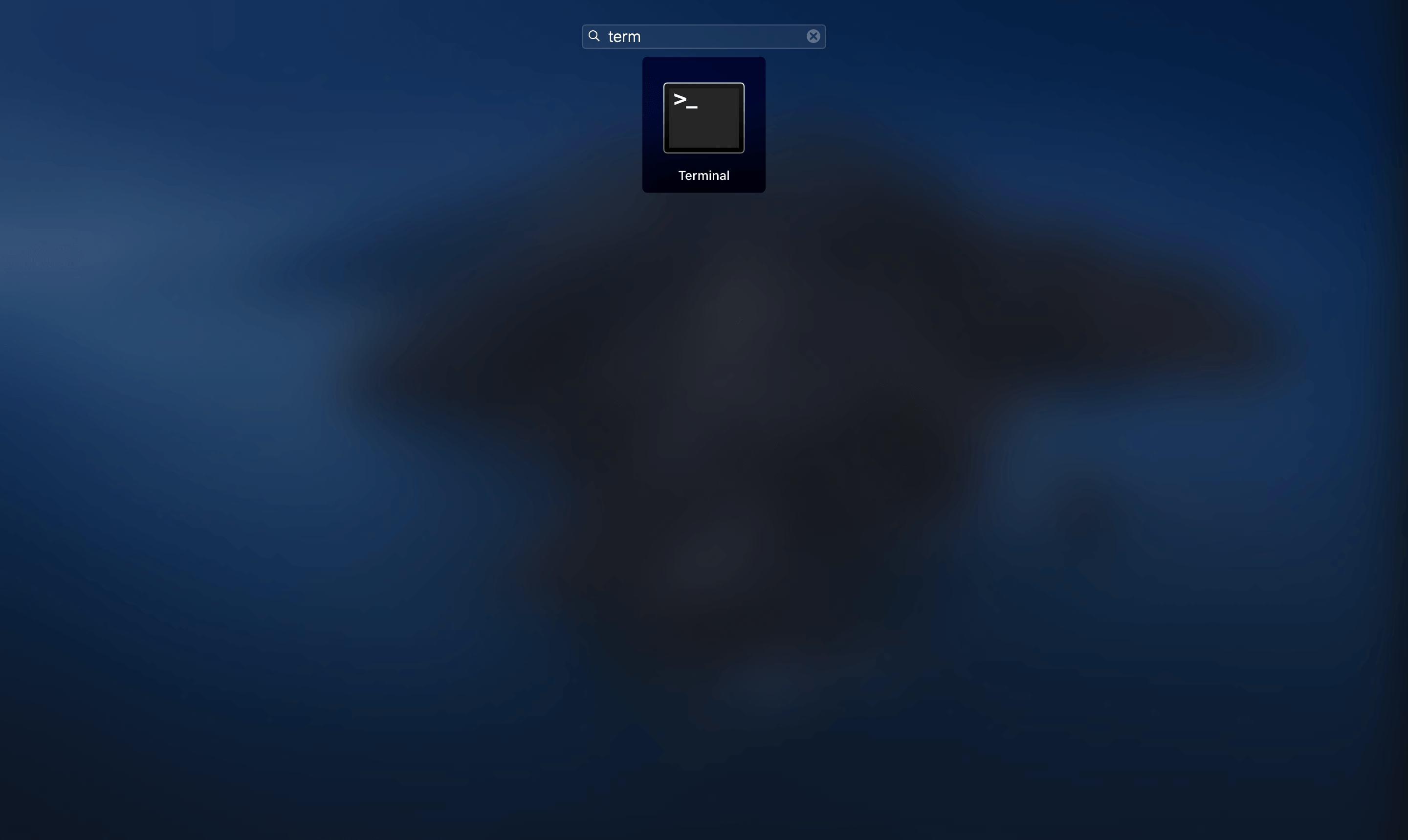 If you don't have Java installed in your computer, then first install it. You can follow this for tutorial on installing Java on Mac.

2. Open a new file with .java extension in your favourite text editor ( we are using VS Code ). The command is :

You don't have to use command to open the file, you can simply open a file and name it with .java extension.

Type the Java code given below and save it.

3. Then compile the program by typing javac filename.java in the terminal. We will be typing javac hello.java.

4. To run the program, type java classname ( name of the class is Hello which is written after class in the code ). It will type Hello World on the screen.

Pressing Enter will display the output as follows.

So, now you can write and run Java codes. We will explain the code in the next chapter.